The inaugural festival took place over the August Bank Holiday weekend in 2014.

This years festival will take place over the same weekend, from Friday 26th  to Sunday 28th August 2022.

The Festival is once again being hosted by Bill Quay Cricket Club.

As well as an selection of lager, ales and cider, food and fun the Festival will feature live music performed across the weekend.

Bill Quay is a small village on the south bank of the river Tyne, approximately six miles from Newcastle. Now a part of the Metropolitan Borough of Gateshead, “the Quay” has successfully retained a lot of its original village features and characteristics.

During the 19th century, Bill Quay was an industrial area catering for, amongst other things, chemical works, bottle works, and paint manufacture. However, like many other Tyneside villages and towns, the cornerstone of Bill Quay’s industrial past is in shipbuilding. At the height of the Tyneside shipbuilding boom, Bill Quay was home to a number of busy shipyards including Boutlands, Harrisons and Wood-Skinner. Indeed, until the recent closure of Harrisons, Bill Quay boasted the last operational shipyard anywhere on the River Tyne.

The festival logo commemorates the shipbuilding heritage of the village, whilst incorporating the club colours of Festival host Bill Quay CC.

The village is also home to Festival friends Bill Quay Community Farm, an important urban farm and one of only 16 farm parks nationally recognised by the Rare Breeds Survival Trust in the UK. Breeds include Tamworth pigs, Jacob sheep, Hebridean sheep, Scots Grey hens and Bagot goats. The Farm is free to visitors and within five minutes’ walk of the Festival. 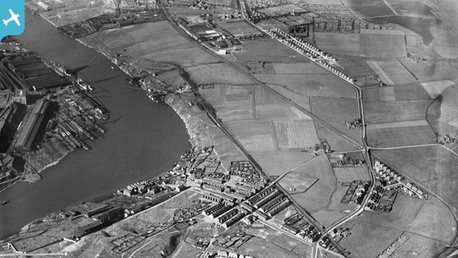 Come and join us at our family friendly Summer Festival